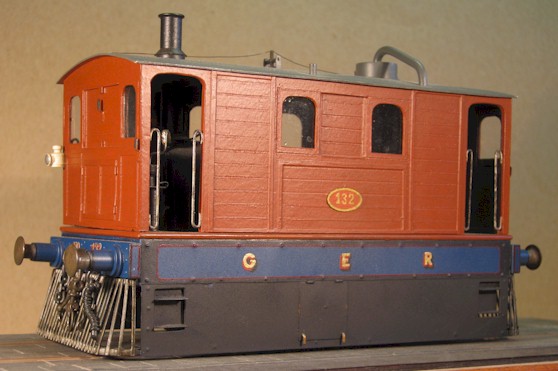 A 7mm scale model of a Wisbech & Upwell Tramway (W&UT) 0-4-0 tram engine No.132, Great Eastern Railway class G15 (LNER class Y6).  This is the first of my Finescale models and was built entirely from scratch in 1974; only the two sets of Ultrascale gears and a Sagami motor were bought in.  I turned the parts for the buffing and drawgear, and other small parts on a home-made watchmaker's lathe.

The upper bodywork is plastic card and all below it is made from steel.  The same in nickel silver, or even in brass, would have been a far easier forming and soldering proposition but steel off-cuts were freely available to me at the time and I had been used to working with steel from making and altering my tinplate models as a teenager.  An enclosed tram engine is undoubtedly simple, even with the internal boiler details, but I still managed to make the ‘works’ unnecessarily complicated.  Working in steel, I cut out two frames and screwed them to square-section frame stretchers, I machined four blank wheels to which were fitted tyres with slivers of acetate and epoxy resin, and I made up some axles, bearings and keepers. 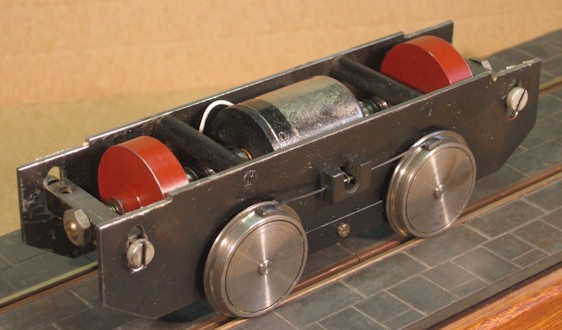 I fitted a nondescript, 3-pole motor that I modified by replacing the shaft with a much longer one made from bicycle spoke so that it could sit longitudinally within the frames and the end thrust could be taken up by bearings in the frame stretchers.  The bearings are actually screws through the centres of the frame stretchers with single ball bearings let well into their inner ends so that the end float may be taken up; after adjustment, each screw is locked with a half-nut.  Although later replaced with a Sagami motor and two sets of Ultrascale gears, the original gears were ‘home-grown’ 2BA worms and hobbed worm wheels.  Two sizable steel flywheels ensured smooth running even with the original indifferent motor. 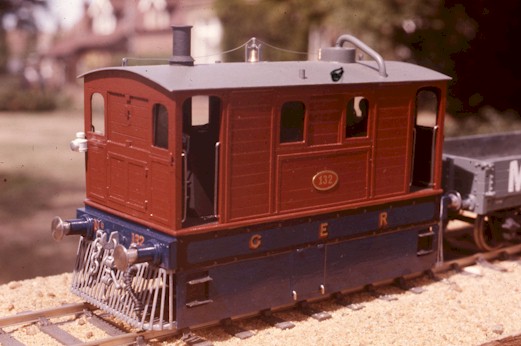 No. 132 on a short goods train shortly after completion.  In the later picture at the top of the page, I have improved the handrails have, painted the lower skirt black and toned down the bright steel parts.