Like many boys of my generation, I was overjoyed to be allowed into the ‘sacred’ front room on Christmas morning when I was three or four years old to discover an 0 gauge tinplate railway laid out on the floor; father, two grandfathers and an uncle were already just ‘checking that all was working properly’.  There was an oval of track with one internal siding ending in sprung buffer-stops all held together with little black clips that gripped the less-than-prototypical-looking sleepers.

The loco was a second-hand Bassett-Lowke 0-6-0 (I believe like the one below) but with a little brown 4-wheel tender; there were half a dozen goods wagons, including a battered brake van, a hopper (filled with dried peas), a crane, bolster, box van, and two new Hornby 4-wheel coaches.  These toys saw much use and stimulated my imagination in my young childhood and, a little later, outsized additions in the form of various freelance Meccano locomotives joined them.  One I remember was a very narrow gauge looking bogie electric with overhead ‘wire’ (flat strips on edge), which worked quite well once I had sorted out all the shorts - insulating steel components with Sellotape takes a boy a bit of time!

So far, so good.  I know that the next bit of the story is not unique, because I have heard it many times from others.  Not long after I had taken the 11+ (remember that ogre held over your head in primary school?), I came home to find that my mother had given away my ‘old toy trains’ to the jumble sale because I was a big boy and I wouldn’t need them now that I was going up to big-school. Hmm, that did not a lot to improve the mother and son relationship and had repercussions for some years to come.

Even before I went to big-school, a much older boy (he was probably two years older than me) came to our house and said that his boys model railway club had been given the list of new boys at the big-school (would permission for that be feasible today?) and would I be interested in joining them.  Remarkably, this was not an 00 layout in a church hall squeezed in next to the table tennis but an extensive outdoor 0 gauge railway in a wood with dozens of clockwork (we didn’t call it spring-drive then) locomotives and copious rolling stock. There were properly laid out stations and the trains were correctly signalled using genuine block instruments (This was Brambleton and it is still running today).  So, after a hiatus of a few months, I was back in 0 gauge. 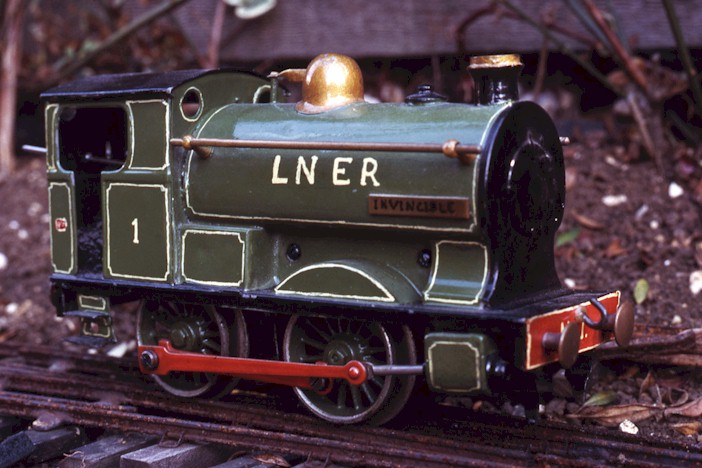 This clockwork loco, a Peckett 0-4-0ST by Bassett-Lowke, was actually the first that I bought to replace the ‘train set’ that my mother gave away when I went up to big-school.  I remember that I bought it for 1/3 from a boy there but I later discovered that it actually belonged to his much older brother!

It was in a terrible state, missing its buffer beams and chimney and, originally missing its coupling rods, conrods and cylinders, although these ‘turned up’ later.  There was still some light green paint on it and I think it was lettered for LNER but, to me, it looked very much like Invincible, the Hawthorne Leslie that I saw working at RAE Farnborough (see a video clip at: www.britishpathe.com/video/invincible-locomotive)  So, after a makeover, Invincible it was named and put to work on a small garden railway and on at a much larger outdoor railway operated by the boys club (still active today: Brambleton www.brambleton.org.uk). 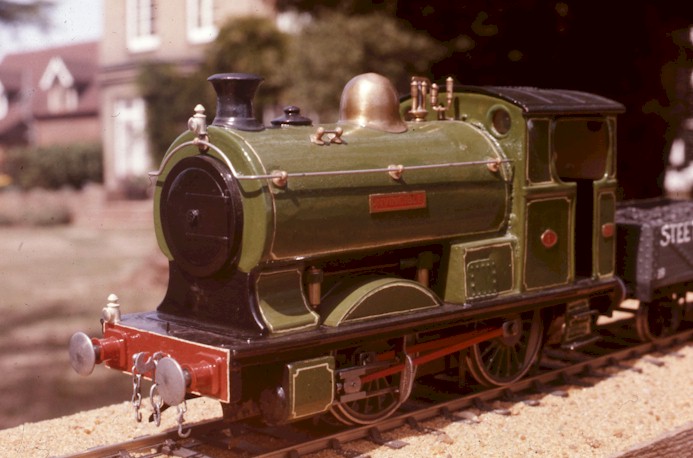 Many years later, after leaving university and deciding to get back into 0 gauge and turning to fine standards, I took this loco as an exercise in conversion (see: My Entry Into 0 Gauge Fine Standard).  I turned up and fitted steel tyres that were insulated from the turned down cast iron wheels with a sliver of acetate held in place with Araldite.  I made new frames from steel (well, I’d always worked in steel before!) and fitted an indifferent motor and a home-made 2BA steel worm and a 2BA hobbed aluminium worm wheel - I know now, but we all have to learn - and it did work well enough actually, although I later replaced the motor with a Sagami and the gears with a set from Ultrascale.  As you may see (above), I also turned up some reasonable sprung buffers, chimney, whistles and safety valves; I made some decent rods and slide bars - from steel, of course - and fitted a false smokebox front.  A bit more finer detailing and a coat of paint, and I had a new loco.

It has been in this condition for over 40 years and my niece, who now has it on long-term loan, used to take it proudly to run on an extensive garden railway each summer before she grew up and moved on to other things.

Today, modellers often refer to a ‘shunting plank’ to mean somewhere that was not really intended to be a complete layout but rather somewhere to try out and ‘amuse’ but which has matured into something rather more.  I had the garden equivalent: a shunting wall. 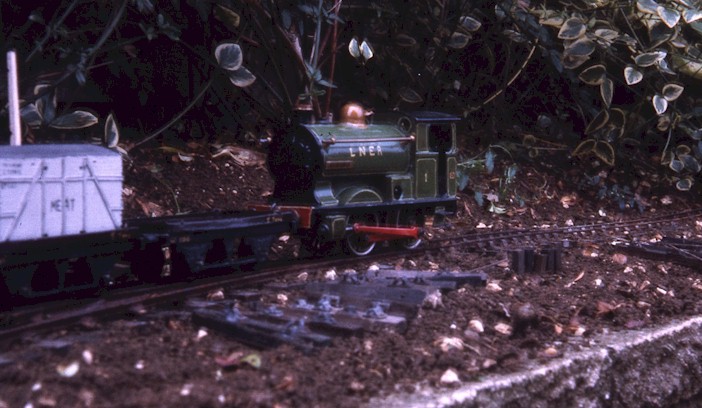 Here is my Peckett, Invincible, again in its first rebuilt form trundling along The Wall with a few Hornby tinplate wagons.  Of course, I lie - it was still clockwork at the time, so it would have been stopped for the photograph, otherwise it would have been fair batting along at quite an undignified rate.

A friend and I built a small garden railway at ‘his house’ down at ground level - well it was not an issue when you were twelve, was it? - but I never took any pictures there probably because my 120 B&W film camera had a huge field of view and would focus right down to (maybe) ten feet so it was truly hopeless for such things.  It was not brilliant at 12” to the foot either with just its two aperture settings: ‘Cloudy’ and ‘Sunny’.  It was nearly always cloudy or very cloudy/raining, or in the shade, so I never used the sunny setting.  However, later I was invited to bring one of my locos to another friend’s garden railway and I took this photograph on Kodachrome II transparency film with my second camera.

I took my Bassett Lowke Royal Scot (No. 6102 Black Watch) but his railway was a goods only line so an ignominious goods train it had to be.  Notice how I very artistically arrange the galvanised steel dustbin just off-centre in the background.