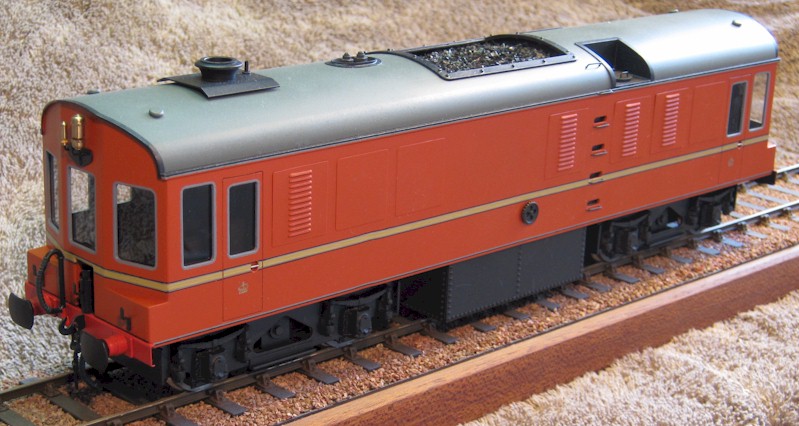 The Prototype
By the mid 1920s, the Marine Electric Co. in Belfast had established themselves as makers of steam turbine powered generating sets, principally in the range 10kw to 800kW for use on ships, but by 1935 the company was looking for other applications.  A 850kW railway locomotive was first proposed in 1936 but the sole example was not completed until late in 1938.  The initial design was for a rigid frame with a 2-6-2 wheel arrangement but, influenced by the diesel electric designs in the USA, the locomotive was built as a Bo-Bo.  Although oil would have been the fuel of choice, the water tube boiler was fired by small coal from a power stoker because the small coal was less expensive than oil or loco coal and was commonly available for use in power stations.  The non-condensing steam turbine drove two 425kW DC generators that powered the four traction motors.

Trials began in the north east of England and the initial performance was promising. However, the special provision of small coal and the maintenance of the non standard water tube boiler and electrical equipment under the less than desirable conditions at a steam shed lead to unexpectedly high running costs.  With the outbreak of World War Two, the locomotive was returned to Belfast and laid up for the duration.  Shortly after the end of the war, LMS 10000 and 10001 were perceived as the future so the generating set and the motors were removed to be used in refitting a ship; the fate of the remainder is not known.  The locomotive had been named Ante Ducem* upon completion but it did not carry nameplates until after its return to Belfast.

Of course, none of this is true but, on April 1st, 2011, I put this text as a caption to the picture, which I placed on the Gauge O Guild Gallery and on my RMWeb gallery; from the latter, I was ‘informed’ that “This locomotive was tested by London Transport.  It was fitted with temporary third and fourth rail collector shoes. It was used on the Metropolitan line for hauling trains to Aylesbury from Baker Street. It ran as a straight electric locomotive on the electrified sections and under steam power beyond Rickmansworth, avoiding the need to change locomotives.”  Later in the day, I added the 'truth' (below).

The Model
I originally built this freelance O gauge model as a mobile test bed for motors about thirty five years ago (ie long before the advent of the current variety of modern motors for modellers and before the Gauge O Guild published its data sheets on the subject). The power bogies, from an Atlas F-Unit, support a frame of brass angle that carries two V-blocks to hold the motor under test. In this rather bare form it fulfilled its intended function but it was later used as the power unit to propel a sixteen-wheeled trolley carrying a sizable analogue video camera around a friend’s extensive garden railway. Once the novelty of driver’s-eye videos had passed and much smaller digital cameras became available, the mobile test bed became redundant and languished in a draw until the winter of 2010/11 when I made up a polystyrene card body with an extruded aluminium roof, louvered brass panels (see Making Louvres) and other details. I must admit to a certain pleasure in the freedom of not having to follow a prototype in building Ante Ducem, for which I have since etched and fitted some suitable nameplates.

A rather cruel enlargement of one of the etched brass name plates.