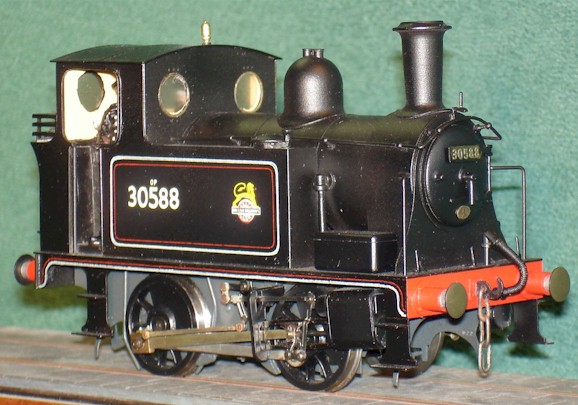 This is not actually one of mine but one that I was persuaded by a friend to rebuild and repaint for him.  I believe that the model was originally built by David Southwell from a kit by Jim McGeown of Connoisseur Models, which is nominally of a LSWR Drummond C14, or possibly a LSWR Drummond S14, as Jim McGeown markets it as a beginners’ starter loco kit and does not purport it to be accurate.  I added Walschaerts valve gear using some components from a Hornby 4mm scale 8F that my friend supplied and added many other details, mostly from scratch, before repainting and lining the model.  (The frames are not really grey, they are  Floquil 'dirty black'; I believe the flash photography may have caused the lightening of the colour.)

I have always declined commissions before, arguing that I am quite slow and thorough and that it would take up too much of my valuable modelling time.  This request was an exception, for reasons that I find hard to explain now, but it certainly did take time to work on and finish - just over 83 hours, which is most probably far longer than David Southwell spent on building the original model!

Here are some notes, along with the times taken for each task, that I made for my friend, which rather illustrates the point:

LSWR Drummond C14
It was quite exacting knowing what to alter, what to include and what to omit in modifying the model to look more like a LSWR C14.  Major errors include wheels that are too large and a wheelbase that is too short; the forward cab cut-outs are in line with the tank tops, rather than extending lower than them, and the smokebox door and hinges are not at all like those of the nominal prototype.

Comments
The oversize wheels and the undersize wheelbase meant that it was not practical to fit the unusual splashers, which would necessarily have been made of insulating material, as the clearances are so tight (one of the prototype splashers was worn away by the wheel).

The cab interior and the spectacles have not been touched, but they are not the best parts of the model.  The fitting of boiler handrails is also rather poor but it would have been a big job to correct.

If the rear motor shaft had not unnecessarily been ground off, I would have fitted a flywheel.

Because the forward cab cut-outs are in line with the tank tops, rather than extending lower than them, it was necessary to make a compromise in the lining: the reverse curves by the cab cut outs were omitted.  The BR mixed traffic livery should include two red lines at the edges of the boiler bands but the etched bands are too narrow to make this feasible.

The smokebox number and shed plates are etched in nickel silver and the raised characters should be painted white. However, painting them with such precision is beyond me.

The gears (steel worm and brass worm wheel) have been running dry for some time and they were poorly meshed, which has caused a considerable amount of material to be ground away from the worm wheel.  The gears have been re-meshed and the contact surface moved to a previously unused portions of the teeth of the straight cut worm wheel.  It is very important that these gears are kept greased.

The front crank pin retainers had to be recessed to clear the back of the crossheads; a small peg spanner will be needed if the retainers are to be removed.

The decals are from the HMRS (previously PC) Methfix range, which are an ‘industry standard’.

There has to be a line drawn somewhere; if the original model had been more accurate, other details, such as injectors, might have been worth adding.

Time Taken For Each Task

Plus ‘thinking time’, plus writing emails, plus looking at pictures, plus travel …  You can see why I have always declined commissions before!