A 7mm scale (O Gauge) model of Royal Lancer, an early member of the London & North Eastern railway A1 class of locomotives, built in 1923 and broken up  in November, 1963 (more details of the prototype A1 Class).

Recognising that I would never have time to build all the locomotives and rolling stock that I would like and that I did not know so much about the LNER, I decided to order a ready-to-run A1 from Sunset Models when they were announced in 2005.  My model was eventually delivered late in 2007 but I was somewhat disappointed to discover that it was a very poor runner with an intermittent short and that it had a number of components that were damaged or that had broken free in transit.  Scott Mann at Sunset Models is a friendly chap and he did try to offer advice when I saw him at shows but he was unable to help in practice. Peter Dawson of Kemilway, the UK importer, did not wish to know so, in the end, it was down to me to sort out the problems.  None of them was difficult to correct but I found it a bit hair-raising working on a fully painted model to which David Studley had superbly added the numbers and corrected the lining.

There was also a problem with the on-board Quantum QSI electronic control and sound system, which periodically shorted out bringing the train to a sudden and complete stand whilst the acceleration function restarted and the train slowly moved off once more.  I disconnected the motor from the control system, to revert to traditional DC control, and the loco actually performs far better without the control system, so I have left it this way. I did find the source of the intermittent short but I decided not to restore the sound.

I felt that some of the details and the borders between the paint colours on the model could be further improved in places but the major visual change was to create a more realistic looking load of coal.

The model is quite heavy and has a powerful motor with a toothed-belt and gear transmission.  It is more than capable handling ten coach trains on an extensive garden railway with gradients of 1 in 70.  In the picture below, it is held at a signal on the Up Main with an LMS sleeper train whilst an engineers' train passes on the Down Slow. 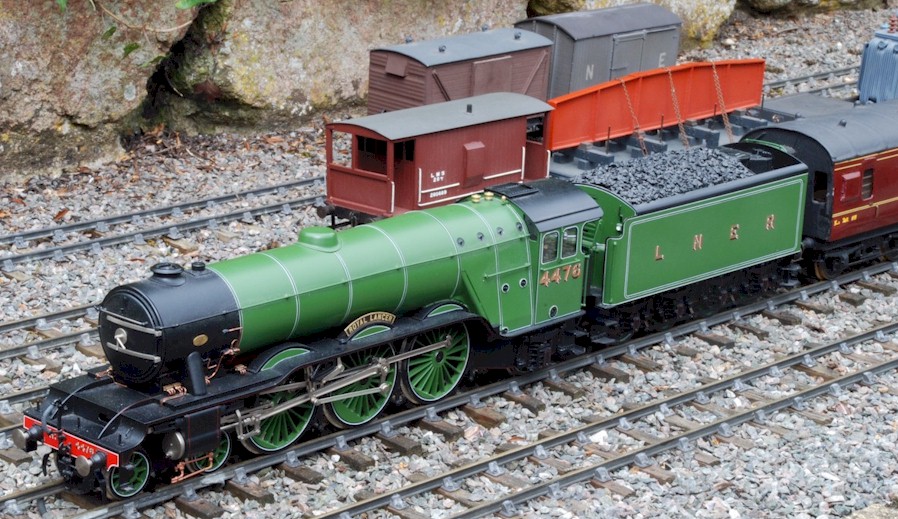 Larger views of Royal Lancer before and 4476 after the minor modifications.