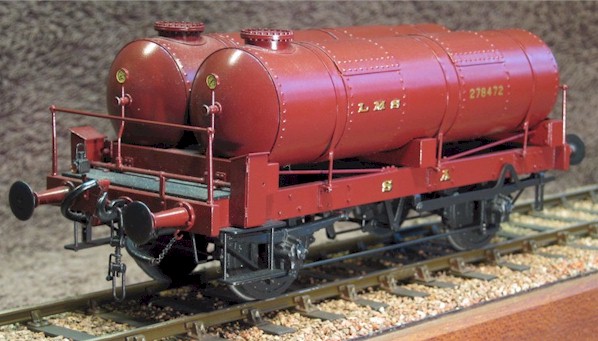 I built this 7mm scale (O Gauge) model of a LMS travelling gas holder truck (LMS Diagram D1816, built on the underframe from an ex-LNWR coach) entirely from scratch from brass, steel and plastic card -  including the wheels, buffing gear and couplings.  It was spray painted in LMS Crimson Lake (Cherry Scale Models) and Dirty Black (Floquil).  Lettering is from HMRS transfer sheet No1 and the whole was sprayed with Floquil Flat Finish.

I based my model on a photograph (Plate 268) and a weight diagram (Figure 113) that appear on page 140 of 'An Illustrated history of LMS Wagons, Volume 1' by R J Essery (Oxford Publishing Co. 1981 SBN 86093 127 7).  The author says " The vehicle appears to be carrying passenger style livery.  However, it is not possible to say what the body colour was - crimson lake, black or slate grey but iwas probably crimson lake in this instance." so I painted it in crimson lake, which I rather preferred anyway.