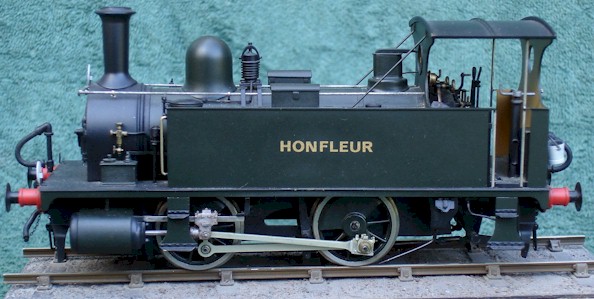 A 7mm scale (O Gauge) model of Honfleur, a London & South Western Railway 0-4-0T B4 class locomotive introduced by Adams in 1892 for shunting at railway docks.  Honfleur became e95 in Southern Railway days and was sent to Plymouth in December 1947/January 1948, but it was withdrawn from Plymouth in April, 1949 and returned to Eastleigh.  It was sold in May, 1949 to the Ministry of Ministry of Fuel & Power and travelled to a site near Swansea under its own steam. The MMF&P allocated it to the Directorate of Opencast Coal Production where its main work site was Gwaun-cae-Gurwen near Swansea.  It was cut up In October,1957.  Honfleur was allocated the British Railways No. 30095, but it is unlikely that it was ever carried.

The model is built from a brass and whitemetal kit formerly marketed by Vulcan Models; the model is compensated and the original open frame motor was replaced by a Sagami motor and the gears were replaced by a set from Ultrascale.

The whitemetal vacuum pipe castings are very delicate and are often bent; I didn't notice this when taking the pictures.  One day they will crack off and I shall replace then with something more robust.