As a first foray into Fine Standard in 1974 after my earlier experience with Coarse Standard tinplate, I started to assemble two 3H kits, essentially as the manufacturer intended, but I soon found that the axles would not be square to the solebars so I decided to slow down, think about the whole operation and then start again.  Looking at the moulded solebars (and the headstocks), I decided that they were really rather poor mouldings so I found a burr that was closest to an endmill, set it up in a Dremel in a stand and proceeded to reduce the solebars to a uniform thickness.  I extended the ends of the solebars that were short, and shortened the ends that were long.  I made new crown plates and inserted plastic rod to represent the ends of the bolts, nuts and washers.  I undertook the same on the headstocks and glued a thin veneer of Plastikard over them to cover the oversized and misaligned slots intended for the end stanchions.  I made working buffers (drill 1mm diameter hole in the end of 1/16” diameter rod, press in a 7mm diameter drawing pin and back fill with solder – clearly an expedient in my young and impecunious days) with springs behind the solebars; I reused part of the buffer stock where appropriate (eg mineral wagons) but I had to make new bases, or I made complete new stocks.

I had not worked on more than a couple of models before I decided to set up a production line to work on twelve underframe kits so I made simple jigs and fixtures to speed things up and to ensure consistency (I still have them as I cannot bring myself to recycle them).  I made brass inserts for the bearings and reprofiled the roughly pointed ends of the 3H axles; they looked as if they had been pointed with a mechanical pencil sharpener, the cones were exceedingly rough and would have soon drilled themselves an exit through the axle boxes.  I machined steel tyres to be press-fitted, and secured with Araldite, onto the turned down plastic wheels that were set to gauge by 1/8” OD brass tube slipped over the axle to beef up its diameter.

On a roll, I bought some underframe kits and I wrote to 3H asking if they would sell me wheels alone; back came a very helpful answer and an incredibly cheap quote for 100 wheels.  I sent off my cheque and waited, and waited, then a package arrived with a letter apologising that they had to wait for more material to make all the axles and so they had enclosed 120 wheels and 60 axles hoping that would be acceptable – and I wasn’t even expecting axles! 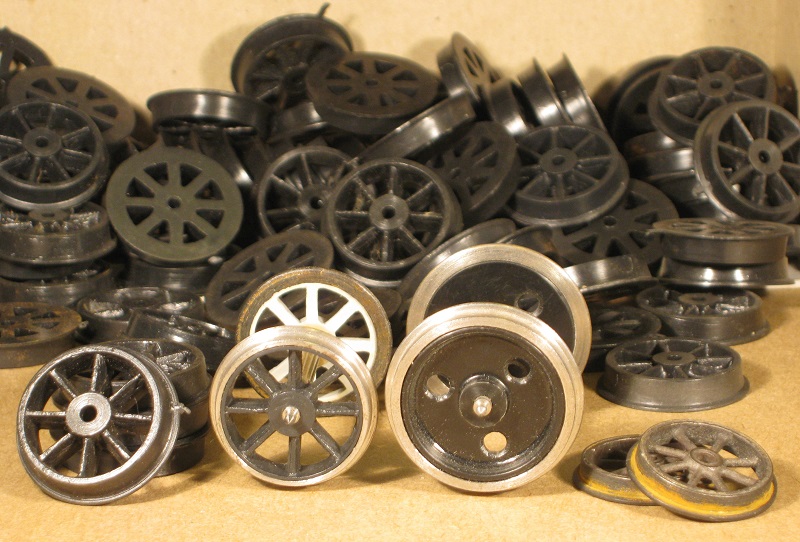 On the left (above) is one of said wheels, propped up by some of the same with more in the background.  As you may see, they are all-plastic and they have a rather coarse profile with an ugly triangular flange.  The tread is 21mm in diameter for a 3ft wheel but the tread is 3.6mm wide; the flange is 1mm wide by 1.1mm deep, which is fine, but the profile is hardly to 0 Fine Standard.  To the left of centre is a pair of these wheels, fitted with steel tyres and pressed on an axle.  Also, to the right of centre. is a pair of 3’ 7½” wheels made similarly from old Hornby tinplate (actually plastic) wheels intended for a van that finished up with 3’ 0” wheels in the end, and on the right is a pair of white metal cart wheels that have also received steel tyres and a wash in the weathering salts for a light railway wagon that I never built (well, not yet).

I never did use more than a few of these wheels before I realised that there were better ways of spending my time than making indifferent 8-spoke wheel sets for scratch-built wagons.  Nevertheless, I did use up all the complete wagon and underframe kits to make presentable models that are somewhat unprototypical but which were still quite acceptable to me at the time (mid 1970s).

3H made kits for 7-plank mineral wagons, both side and end door and side door only versions.  Here are one of each that I made up as PO wagons: 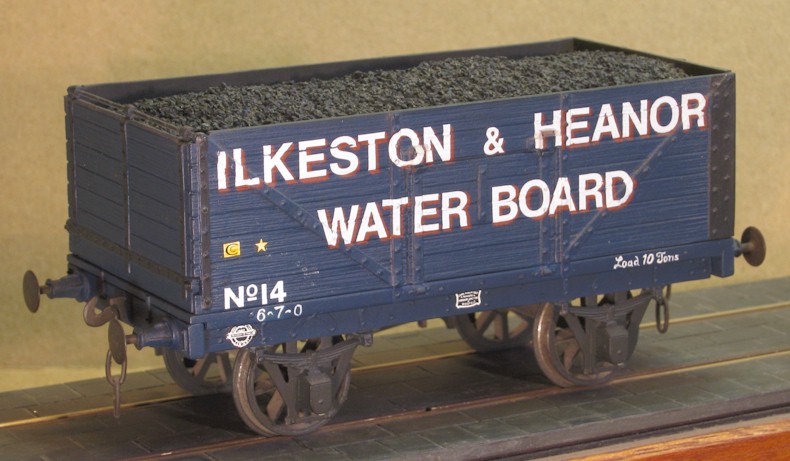 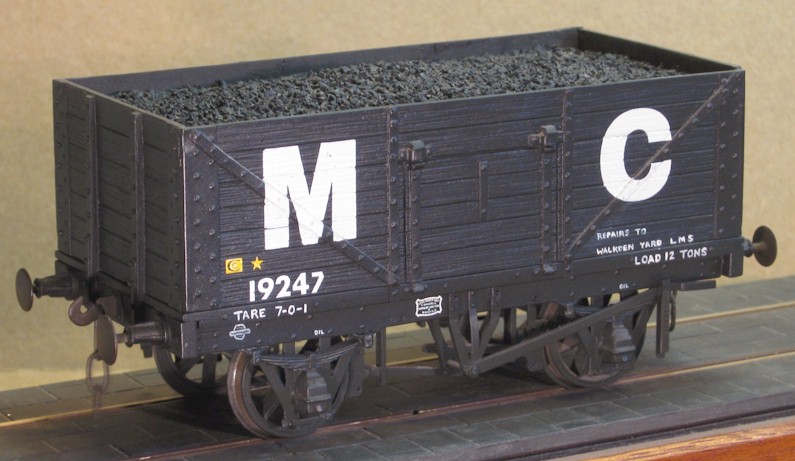 and a side and end door kit as a company wagon: 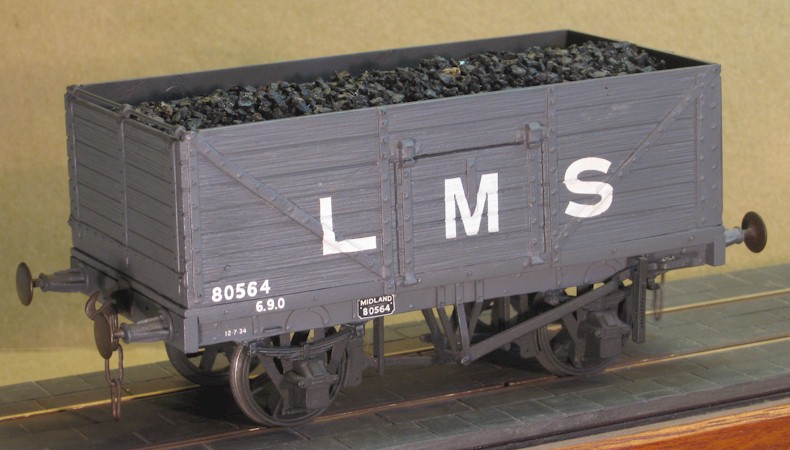 I don’t believe that the 5-plank kit was offered as anything other than side door only; here are examples of PO and company vehicles: 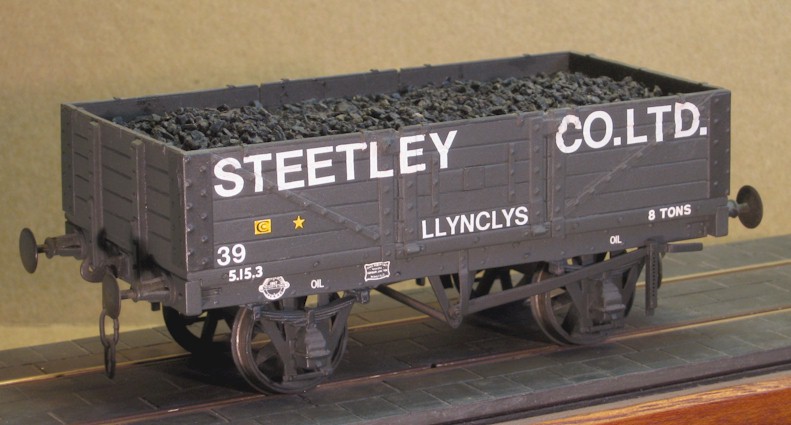 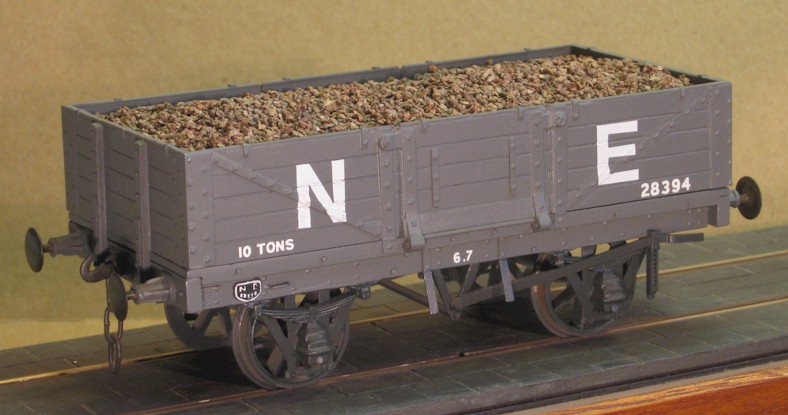 The prototype for the 3H cattle wagon was a rather early and obscure example from the LT&SR; I altered one into a Brecon and Merthyr Junction Railway wagon, one I amended to be more like the intended LT&SR prototype (but in MR days) and one that I altered to be an early MR example: 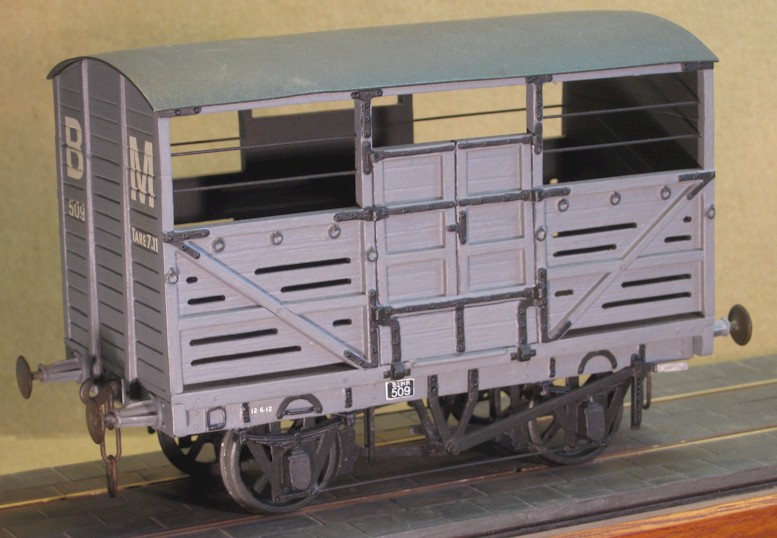 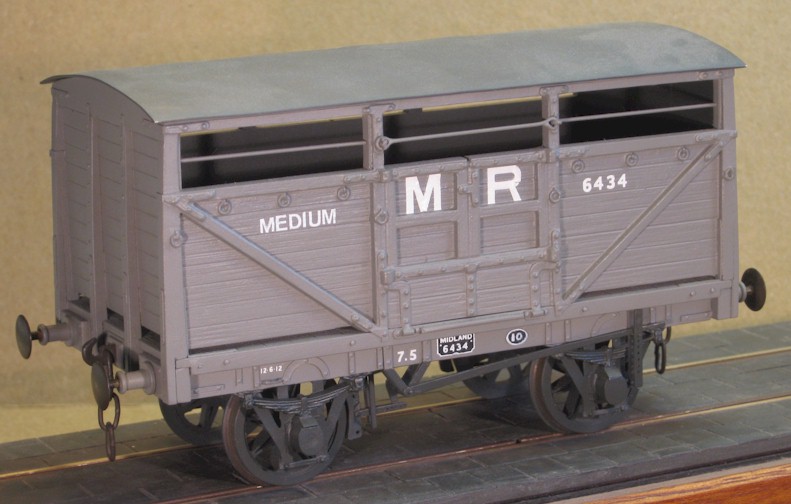 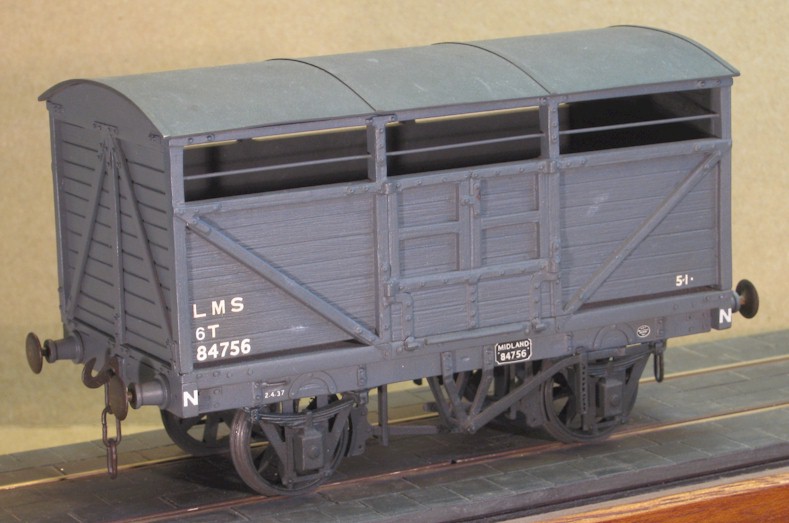 Near the top of this page, I illustrated a 3H 3-plank open that I had altered to be a steel-framed M&SWJR example in GWR livery but here is one that I altered rather less to be from the R&SBR:

Like the Union Salt wagon, also in the earlier picture near the top of this page, my last 3H example used only some parts from an underframe kit and is effectively a scratch-built model of a 7-plank Harrington Coke Ovens wagon with coke rails: 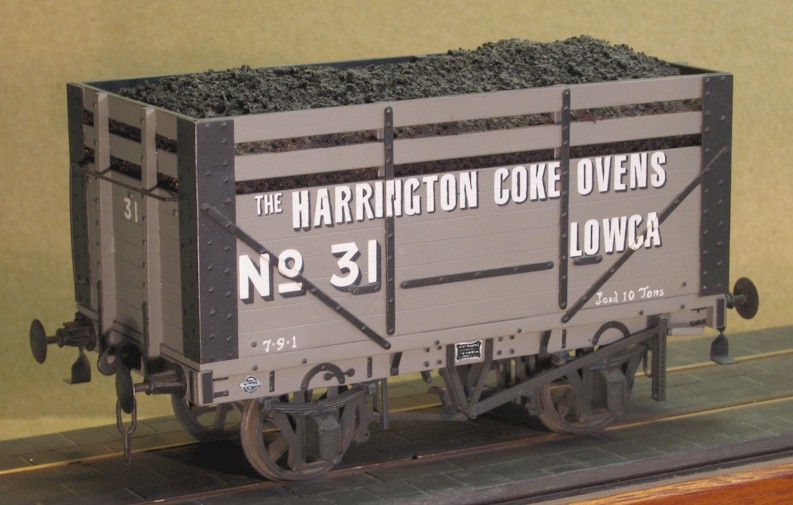 Except the MR cattle wagon, which has Slater’s split-spoke wheels, all these examples have their original 3H plastic wheels that I thinned and turned down and to which I have fitted steel tyres; the largest flaw is that, to obtain the correct diameter at the tread, the rims are rather too skinny but they satisfied me at the time (mid 1970s).  The body of the 20T Highland Railway brake is (mostly) from a Highfield vacuum-formed kit and the remainder is scratch-built but with a few parts of a 3H underframe kit: 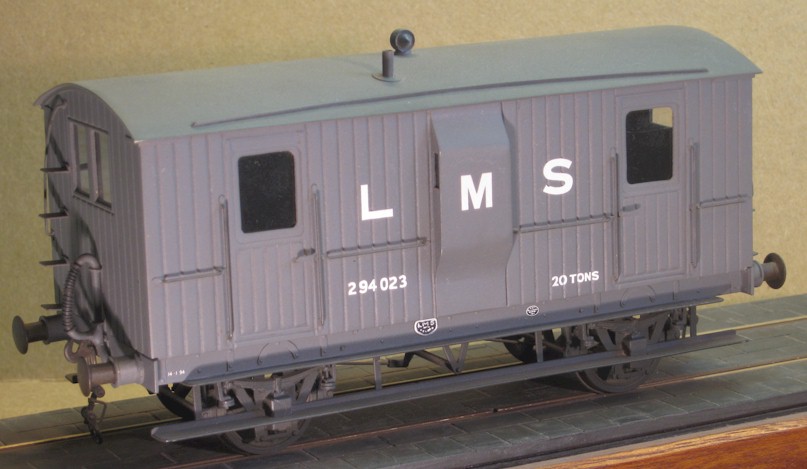 I built a model from a resin body made and marketed by M B McGechan in the 1980s.  Malcolm and I were colleagues at the time; he modelled 1950s BR so he gave me a GWR Mink to make up in GWR livery so that he could photograph it for publicity purposes: 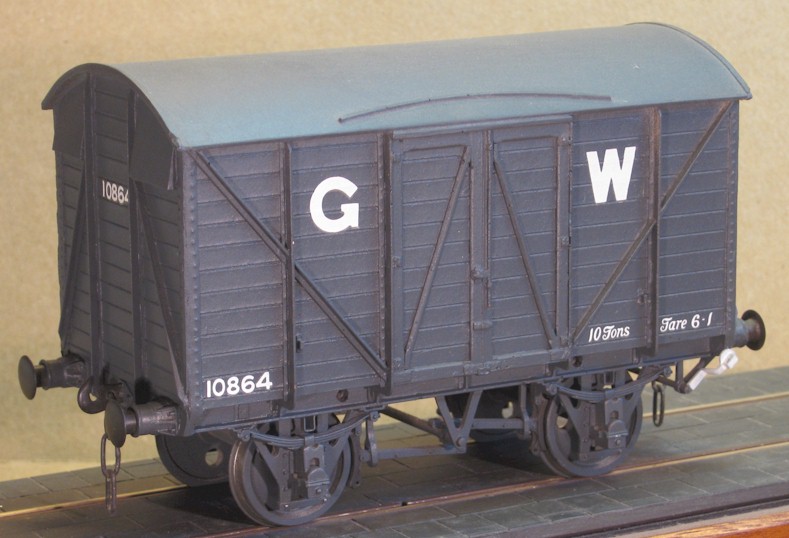 I used as many off-the-shelf part as was reasonable so that he could write instructions/notes on how to make such a model from his body shell.  I often used to call into Malcolm’s office at lunchtime where I would find him cutting up old cardboard boxes to make up packaging to fulfil mail orders; I saw several SR and LMS van types and I think there was at least one LNER van but only the one GWR Mink. We lost touch when I moved away from Scotland shortly afterwards (1986) but I never did see the GWR body shells advertised.

When the Metalmodels etched brass and whitemetal kits for the GWR Siphon F and the GWR K3 were released I bought them both.  Even though they were expensive, I thought that they were worth it because they were streets ahead of contemporary, a bit before their time even.

The kits were very well designed and executed with many detail part, although I did make some modifications, such as adding the gas pipes and modifying the lamps by reducing their size and making them to screw into cross-members to retain the roof (below).

I bought the kits in 1974 but I left them behind untouched when I went to study and work in the USA in 1976 and I fetched them when I was next in the UK in 1980.  I built and painted them in 1983 but I did not line the K3 until I was back in the UK in 1987.  I did not wish to tackle the lining until I was sufficiently accomplished after lots and lots of practice; I have been asked why some of my storage tins are lined out in black and orange.

In 1980, I bought second hand three brass etched kits by Colin Waite of  GWR non-passenger coaching stock but I did not build and paint them until March 1993.  By that time, I had started building the locomotives that are listed on my page Railway Model Engineering and that are described in detail in captioned pictures on separate pages.

The kits for the PLVs required only wheels and some other detail parts to be made but the kit for the W1 parcels van contained only the sides, ends and roof so I bought a damaged Slater’s van kit and modified the underframe and roof to suit.